Here is an essay is called “Funeral Songs” They are the liner notes for Vigilantes of Love last “Live” recording, ManicPhaseShifter. The performance was incendiary, mercurial. on April, 27th, 2000. Live at Schuba’s Tavern, Chicago, IL.
23 songs. On sale @ http://www.BillMalloneeMusic.Bandcamp.com

This historic performance was/is dear to my heart. So it needed some liner notes.
It proved to be one of the band’s “last hurrahs.”
This mastered recording from the board was a storming, mercurial set played Chicago in one of our favorite rooms, Schuba’s. The set was as intense as the day is long.
The little band that could. And did.
Here’s how it all felt at the bitter end…
Enjoy the essay/liner notes.
Love & Grace, friends,
~ Bill Mallonee
~~~~~~~~~~~~~~~~~~~~~~~~~~~~~~~~~~~~~~~~~~~~~
Liner notes for MANICPHASESHIFTER

“FUNERAL SONGS” by Bill Mallonee
I think songwriting is a type mourning. The older I get, and the more miles I log on the road, the more I am convinced that a wordless, intangible spirit emanates beneath the veil of this reality. And it seems to be something akin to grief.
It is as beautiful as a heart-beat of a new-born or the passion between two lovers. All nuanced with a certain transcendence.

How else to explain it?

I think from day one I’ve always tried to give that heart-beat a nomenclature, if only to make sense of it for myself.
You learn that one can mourn with both tears of joy & grief in the eyes at at he same time.
Grieving. In a world of no guarantees perhaps grieving is the loudest declaration of faith left to modern man.

From the git-go, there was always so much inside.
So much needing to get out, then hold up to the light. Fine tuning (in the form of songwriting) came later.
So much to place on the table of the marketplace. Back then, I wrote a a clip of something like 75 songs a year. And while the clip is down to something like oh, 40 songs a year, the thrill of making new songs is still the same as it was in the early days of the band. Writing is a salve.
Salvific, even.

But always first: I wrote to save myself, to make sense out of a broken world within.
I have never written a single song with a particular audience in mind.
Why bother?
We’re all living in the same skin. Tell the truth, or some shabby, well-intentioned version of it, and we’ll all “get it.”

Me? I played out my quest make sense out of the world within & without via a little rock band called Vigilantes of Love. I divulged as much as I could to everyone who passed through it’s ranks.
I was lucky/blessed to have great band mates, those other passengers on the trip.
Sometimes all one can do is throw on the last shovel-ful, breathe a sigh and then walk away.
~~~~~~~~~~~~~~~~~~~~~~~~~~~~~~~~~~~~~~~~~~
Love, Loss & Transcendence.
Those are the songs that interest me.
This whole live set sounds freighted with a desperation that is bleeding with such things. Such things always takes you by surprise.

People ask me if I miss Vigilantes of Love.
Of course, I do. Every incarnation, but especially this one here. It had a chemistry that I have rarely seen in any other band. It was brutally honest, gutsy and authentic. We always knew the “end was near.” How we laughed and wrote our way through it is, I believe, a testimony to each individual’s sheer “cussed-ness.”
And the grace of God.

Mostly, though, I miss the friendships.

And yes, I mourn for what should have been and could have been if the right folks in our industry superstructures (managers, labels, agents) had done half the amount of work we did as a band.
I DON’T miss the truck loads of BS we put up with from suchincompetent people.
BUT, I will say this:
Being victimized consistently by incompetent industry people opened my eyes to one thing: You don’t need any superstructure to give you “permission” to be an artist.
How does the song go?
“Sew your heart onto your sleeve…and wait for the ax to fall.”

I don’t know any other band that released so much work & toured so hard over 10 years (and 15 albums) with so little results than VoL.
What to say? I think we took as much of it as we could, romanticized it for another 10 albums over the last 5 years of the band’s run and then said: “Enough.”

This finale is about the “enough.”

At the end of the day we were about the song & the moment; the delivery & the spirit…and the rock & roll.
Jake, Kevin & I hope you enjoy the set here as much as we did playing it.

(Michelle Thompson; bgvs on Nothing Like A Train, She Walks on Water,
Good Luck Charm & Starry~Eyed)

(All songs by Bill Mallonee except “My Back Pages” by B. Dylan)
Administered by BMI.

“The “source tape” for this was double disc soundboard recording from Schuba’s Tavern, recorded 4-27-2000. All in all a great, high energy show, and I’m very happy with how it all turned out after mastering and some editing.” ~ Bruce Neher/mastering engineer for “Manic. Phase. Shifter”~ Vol Live at Schuba’s 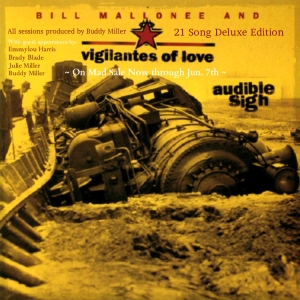 A blistering band.
A brief reminiscence.
“You pick up an instrument. You wrestle it. Then, you learn to tap the inside and turn it outward. You find your voice, your “nomenclature” for telling your part of the story…and then you start to dream a bit….”
How do you know when you’re making history?
17 years ago I made an album. It was called “Audible Sigh.” Sure: A grim title in some ways. Such had been our experience as rock & roll “band in a van” for the 2 years leading up to walking into Buddy Miller’s studio in Nashville. We were on the verge; all the variables in place, we thought. I had the songs. We were an undeniable band with years of experience on the road.. And yet, and yet…
We made a great record. In 3 weeks we recorded 21 songs.
Killed it.
Folks still talk about it.
Critics went nuts over it.

The whole experience changed my life. It’s still changing it in ways I never imagined. In some place, deep within, i will always be “walking wounded” because of those 4 years (1997-2000) with 3 of the coolest musicians in the world.
Produced by Buddy Miller & myself, it featured many a guest appearance. (Emmylou Harris, Julie & Buddy Miller, Brady Blade, & Kevin Heuer).  But at the core? It was always about 4 guys. Guitarist Ken Hutson, bassist Jake Bradley, drummer Kevin Heuer and myself.
“Audible Sigh” was celebrated by many a critic as one of the best Americana records of the 90’s.  It still continues to make “best of” lists.

The band was on the potential verge of it’s biggest break through.  We’d laid the foundation via diligent, heavy touring and 2-3 albums a year. We worked hard against overwhelming odds. The 150 or so songs I’d written during this period were visceral, raw, tough, tender, full of soul, spirt and post punk energy;  And they were well-played, night after night, by Kenny, Jake, Kevin and myself. Through 4 albums and an EP, from 1998-2001.  We made many friends. Many of them here on this newsletter. We are still very grateful for each of you.
It was a surreal & strange 4 years.  Through the albums Roof of the Sky, Audible Sigh, Electromeo, ‘Cross the Big Pond and Resplendent/Audibly “Live” what I continually hear is a band that is hungry & alive. Immediate and relevant. and giving it’s all. Our repertoire was nearly 100 songs. That’s an amazing set for any band. Each of those those gentlemen (Ken, Jake & Kevin) were, and still are, my heroes. But, looking back? I honestly think I saw the “writing on the wall,” at least far as the outcome goes. Life “owes” no one anything.
You pick up an instrument. You wrestle it. You learn to tap the inside and turn it outward. You find your voice, your nomenclature for telling your part of the story… …and then you learn and then you start to dream a bit. Then you work hard, often against insurmountable odds…and slowly you start to see, feel, believe that it could “go to the next level.” But, no one can do it all alone.

So MANY of you here on this list were there. You pulled, encouraged and prayed for us. You bought lots of records. We’re grateful. Thank You all.
So many promises made to us from “the industry.” From labels, to managers, to booking agents.  In the end?  All lies. Lies characterized by incompetence & neglect; flippancy and short-views on their part.  When you realize that people with small views and tin-ears are dictating your future?  Well, it was bordering of nightmarish. We soldiered on a bit, post 2000, but, as I said above: the writing seemed to be on the wall.
Bands live in vans.  We were on the road 200 shows a year. We laughed. We joked. We fought. Ate, drank, slept.  Fought through weariness and depression. Rejoiced.  Immersed in the backdrop & glory of the four seasons of this great country, we bonded. We looked after each other.  We were family. And then it was gone…

Musically?  I think we knew what we had was big magic. Night after night, under the most adverse, discouraging circumstances, this was a band that delivered; Delivered raw, heart-on-sleeve America-roots music with passion & spirit.  Me? I rarely saw what VoL delivered equaled by any of the more “resourced,” “successful” acts.

They say life is risk.  So there’s a life risked for a 4 year span. The highest elation. Filigreed with transcendent moments… and, in the end, the deepest despairs.  By the end of 2001 it was in shambles and all over.  Irreplaceable. To be honest? I’m not sure I’ve ever gotten over it.  I’ve never put so much trusting energy into people or anything in my life.  VoL ”rest in peace”

17 years down the stretch, since Audible Sigh, and I’m never sure anymore if what we do here counts for anything anymore. Is it only in our youths that there were days when all seems like a dream; but dreams real enough to be charged with a sense of purposefulness and hallowed-ness?

Never have I seen since or been part of something driven by so much hope, expectation and sheer “pluck.”
I wept inside for years after it was over.

“Perspective, old chum! For God’s sake man, pull yourself together!”
Forgive me…
I got to write songs people still sing. I made an album that, I think, still sounds better to be in the Americana word than 99% of what passes for country-alt today.
I was allowed to “open a vein,” to invest heart & soul in each performance on every stage all across this country and in the UK.
As a band, we got to make magic, transcend a bit of time, and maybe even move to the fringes of something bordering the Eternal…
We’ve all heard of near death experiences.
Perhaps these were “near life experiences…”

Who knows? Who cares?
It’s my little part of the story
I’m proud of it all;
proud of VoL;
proud of my friends;
proud of our fans.
As the old standard goes:
Thanks for the memories…
~ bill