We are to be about “making worlds.” 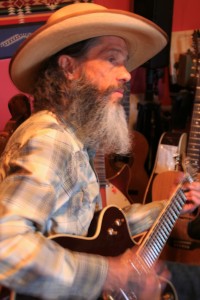 Write, Paint, Compose & Film as if your work was the first of any of it…even the last there will ever be.

I turned the radio off in 1992, shortly after our 3rd national album, Killing Floor, was released; It seemed to be a good thing. There was so much great energy on much of 90’s indie radio, but I did not want to be one who was borrowing others ideas; My own path seemed to be one of experimenting with themes and accompaniment that I was just beginning to “hear in my head.”
sure: I knew (and loved) primitive blues, Gospel, folk and country artists. It just took low-rent touring, failed relationships and betrayals to see just how very much their stories existed beneath my own skin.
In ’92, I also stopped reading most of the then-current pop-press and rock music periodicals, as well.
The increasing lack of journalistic integrity (friends blogging about their friend’s bands in the most grandiose superlatives is hardly journalism; That coupled with the ever-present push towards the info-commercial rendered classic “rock-journalism,” irrelevant, at least to this reader.(Perhaps it’s making a come back now? I don’t know.)

As harsh, nay even as “arrogant” as all of that sounds?
At the least, I found that I was beginning to care less & less about what the masses were embracing. “Hipster driven scenes doth not necessarily great art make.”
You catch my drift.

Sure, I was able to make plenty of 3 to 4 minute jangle-y guitar pop songs for the radio when I was a signed artist; but such “requirements” were becoming less and less engaging.
Again, all of this was all working it’s way out in impressions and nuances of the heart.
Here’s the thing: It seemed to me that the depths of love & lust, loss & gain, mortality & the eternal, pain & pleasure were buried in the grooves & soulish-ness of the archives of the past;
The spirit of a “the song” unadorned emerging through hardship, woe and joy are what captivates me now. I find myself drawn to much “world music” in an effort to dig beneath and “hear” what it is that produces similar passions reflected in their art & music.

(Such soulish energy & transcendence is similar to what I experienced as a kid growing up with a stack of vinyl and a beat up 1930’s Slingerland drum set in a dusty basement in Chapel Hill, NC.)

And so what has happened has been a self-imposed “retreat.”
A retreat to begin a journey; an attempt to frame & answer the question:
“Why do I do what I do in the way I have chosen to do it; engage in it far from the mainstream, out of the limelight, with few resources, save the songs themselves?”
Stay tuned, those who will…

American songs.
Our “old” songs and the places, movements & spirit they were conceived, carried & birthed in?
Well, those “old” are ever new.
Eclipsing space; transcending the confines of time.
You’ll likely find them drenched in uncertainty & conviction; blood & healing,lust & fidelity, promise and betrayal…
But ably tempered with faith, hope, love and wisdom;
The “tried & true.” The place where lines between “art” and Life dissolve;

“Stand ye in the ways, and see, and ask for the old paths, where is the good way, and walk therein, and ye shall find rest for your souls,” thus saith the Lord.
Jeremiah 6:16-19 King James Version

Standing the test of time, such songs still extravagantly nurture & reveal.
That’s the work that interest me… ~ Bill Mallonee